The Strange Birds Of Ottawa 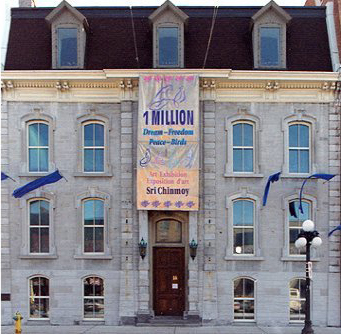 It’s like a giant aviary. Hundreds of thousands of birds have found a temporary home here – hovering by the windowsills, clinging to the walls, nesting in the archways and vestibules. Everywhere there’s movement – birds sweeping through the air in huge parabolas … tumbling from the ceiling like giant waterfalls … exploding through the halls like shards of light. What was once an empty four-story heritage building in downtown Ottawa has been converted into one of the most astonishing art galleries ever built.

This exhibition of one million – yes, one million – bird drawings by Indian artist Sri Chinmoy is unique in many ways. For one thing, according to the artist, they’re not birds at all, but depictions of the human soul in the form of birds. Each bird, in effect, is an impression of immortality, a fragment of divinity that he has snagged with his paintbrush and brought down from heaven. But that’s not too surprising since Sri Chinmoy is not only an artist but a well-known spiritual teacher and mystic. The million soul-birds are inner visions that have risen up from the depths of his meditation, and with pen and brush he has given them form.

“Each of these birds is a prayer of my heart,” he declares. “These prayers I am offering to the highest Absolute Lord Supreme.” With a million prayers all converging in one spot, the gallery has become a veritable temple of worship. But there’s nothing solemn about these bird-prayers. They literally vibrate with energy. A sense of joy infuses the curve of their wings, every thrust of their beaks, every hesitant kick of their newly discovered legs. If these birds are prayers, what the artist is worshipping is the dynamism and diversity of life itself. 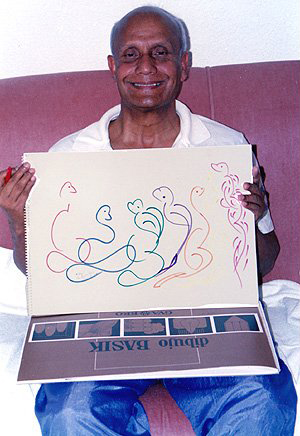 The birds, ranging in size from less than a quarter of an inch to three or four feet high, have been drawn with colored pens, acrylic paint, crayon and even magic-marker on paper, notepads, rice paper, cloth and foam core. They appear singly and in groups, as notes on sheets of music, as messages on postcards, as vistas inside computer-generated circles. Many of the birds, especially the larger ones, have their own quirks and personalities. Some peer out boldly from their frames, staring at the world with eager curiosity. Some are puffed up like divas or shy and graceful as dancers. Some look puzzled, even bewildered, or joyful, vain, proud, quizzical. Some gaze at the viewer with sadness or compassion; others are self-absorbed, oblivious to the outside world. Some look absolutely dumb; others shimmer with intelligence.

In many of these creatures there’s a whimsy or playfulness that is quite delightful. Their tiny eyes seem to be looking in all directions – over their shoulders, around corners, up into the air. Their round bodies are engaged in every imaginable activity – soaring off into the sky, plunging to earth, stretching their legs, smelling the fragrance of a flower, poking their heads into the ground.

Some of the birds are like soul-mates, eternally paired; others fly side by side in giant columns – like an entire genealogy of families. Sometimes we’ll see a large mother-bird surrounded by hundreds of offspring, as though the nestlings were continuations of the larger one’s consciousness – like an explanation or footnote. A single painting will contain different species, as when hundreds of small pen-and-ink birds are zooming around a stationary bird drawn with a magic marker. And some of the larger bird souls are actually made up of thousands of smaller ones, which form its beak and the outline of its body.

Perhaps the most striking works are what one might call the ‘godhead’ paintings – composed of tens of thousands of tiny, multi-colored birds. The birds themselves are almost too small to be distinguished; there’s just an impression of movement, a density of consciousness pulsing from the canvas. From afar, the birds resemble a series of furrowed fields viewed from a great height – countless rows of microscopic souls intersecting and parting over the face of the canvas. Each ‘field’ or section of birds has its own shape, its own color, its own movement. And within each section are other sections – tiny red birds flying their own formation amid the larger pattern of green birds, for example, like different planes of consciousness moving through one another. It’s just too complex, too vast, for the human mind to comprehend. There’s something transcendental, almost unhuman about it – like the face of God. Sri Chinmoy has somehow managed to create a body of work as awesome as the monoliths of Stonehenge – a universe as mysterious and sacred as anything any artist has ever done.

Gazing at this universe of souls, with its infinite variety of shapes, colors and moods, gives an almost religious experience. It’s as though the artist has somehow managed to evoke in these paintings the beauty, the wonder, even the holiness of the soul’s world. This universe of soul-birds, despite its unbelievable complexity, is very simple, highly ordered and extremely beautiful. There’s something uplifting about it – a power, a calmness and, above all, a sense of absolute joy that leaves one deeply moved. 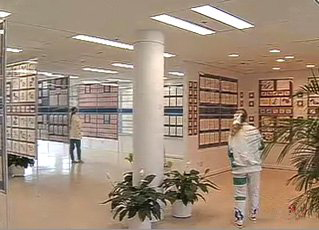 This exhibit of one million birds, and particularly the more unusual paintings, is like some orchestral performance from another world. As we listen to the strange, celestial melodies played by countless instruments, the notes blur into a single resonance, so that it seems more like silence than sound. In the depths of this silence, the mind no longer tries to understand; it surrenders to the heart, and the heart – fully awakened – becomes as vast and still as the sky. When viewed in this kind of meditative state, the meaning and significance of Sri Chinmoy’s soul-birds becomes most apparent.

The artist has entitled his exhibit “One Million Dream-Freedom-Peace-Birds” and dedicated them to his mother for her birth centennial. “These birds,” he says, “are a new creation – the creation that will sing the song of Immortality in the life of mortality. If we can identify with them as they fly in the sky of boundless freedom and peace, it will remind us that our own soul is also flying in the vast freedom-sky carrying the Message of our Lord Beloved Supreme here, there and everywhere.” If we close our eyes, we can almost see these immortal soul-birds, necks outstretched, wings motionless, gliding through our own heart-sky – leaving a trail of hope, beauty and joy that we can forever cherish.