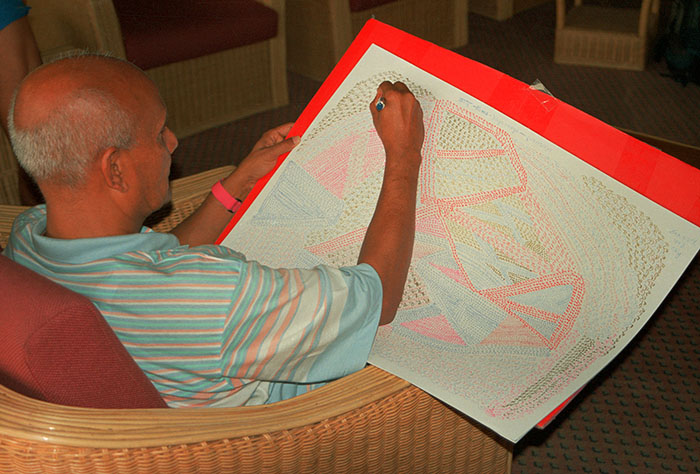 Sri Chinmoy draws a special Soul-Bird artwork for his beloved dog Kanu, which takes him 5 hours and 15 minutes to complete.

“Kanu is the sun of my heart,
The wave of delight.
Nobody is a stranger to him.”

Sri Chinmoy postponed the celebration of his 700,000 birds for one more day. It was December 23rd — the first anniversary of the day that one of his two little dogs had passed away.

When the sickly white puppy was first brought to him, almost twelve years before, he had given it the name ‘Kanu’, an epithet of Lord Krishna. It was not expected to live, but it defied the odds and lived for many years in Sri Chinmoy’s home, bathed in affection and love. When this gentle soul departed, it left a void in the hearts of Sri Chinmoy and his students.

Now, one year later, Sri Chinmoy honoured Kanu’s memory with songs and meditation. That evening, he created his lasting tribute to Kanu. Working on an 18” x 24” sheet of paper, the artist applied gold metallic ink and red, blue and pink ballpoints to create something truly unique. He portrayed his little dog in its customary pose — sprawled on the couch, thin legs sticking straight out to the side and back slightly arched, as though resting on a cushion. This frame was clearly discernible in red ink pathways across a vast mosaic of birds. Even Kanu’s form was composed of birds, giving it an otherworldly effect, as of a being not tied to this terrestrial life. Sri Chinmoy gave the finishing touches to this poignant memorial to Kanu at 8:30 a.m. on December 24th. Five and a quarter hours of concentrated work had gone into this page. It contained 14,854 birds – and one beloved dog.

— Vidagdha Bennett
One Million Heartbeats from a Universal Love-Heart