Meditation held with President of India 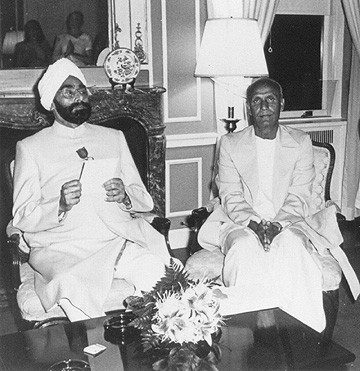 New York – The President of India, Giani Zail Singh, met with Sri Chinmoy on October 30 for a brief session of prayer, meditation and spiritual discussion.

The Indian President, who was on his way back to India after open heart surgery, listened in rapt attention while the Meditation Group singers sang a song that Sri Chinmoy had composed in his honour, entitled “Giani: O Enlightened One.”

The President said: “Your prayers to God give greatest strength to me. I cannot forget ... (them).”

Sri Chinmoy responded: “Beloved President, your simplicity is your towering greatness. Your sincerity is your illumining goodness. Your humility is your unparalleled excellence. Your wisdom is your perfect Perfection.”

Comparing the President’s humble origins with those of Abraham Lincoln, Sri Chinmoy called the Indian leader “the Abraham Lincoln of India.” Although neither of the two Presidents cared for university degrees, the Master pointed out, “Both of you have proved to the world at large to be oceans of knowledge-light. President Lincoln’s soul and our beloved Giani’s soul are sailing in the same golden boat towards the supreme destination, a universal oneness-heart.”

The Indian President said: “When I look back within, I feel that I may not deserve all those words. All that I am is due to the Grace of God.... It is God’s Will that prevails and makes one do what God wants one to do. Even so, Mahapurusha, your words will help me live up to your expectations of me. I thank you and your people for coming and praying for me. I see such purity inside all of you. Your prayers have definitely reached God. I thank you profusely.”

Anahata Nada was the longest-running newsletter of the Sri Chinmoy Centre. It was first published on January 1, 1974, and chronicled Sri Chinmoy’s life and activities for over three decades until 2007.