Sri Chinmoy began his weightlifting adventure on 26 June 1985, with a lift of just 40 pounds. Over the next year and a half, his progress astounded the weightlifting world, culminating in a lift of 7063¾ pounds on 30 January 1987. Here, we honour his weightlifting anniversary with a visual celebration of his landmark achievements. 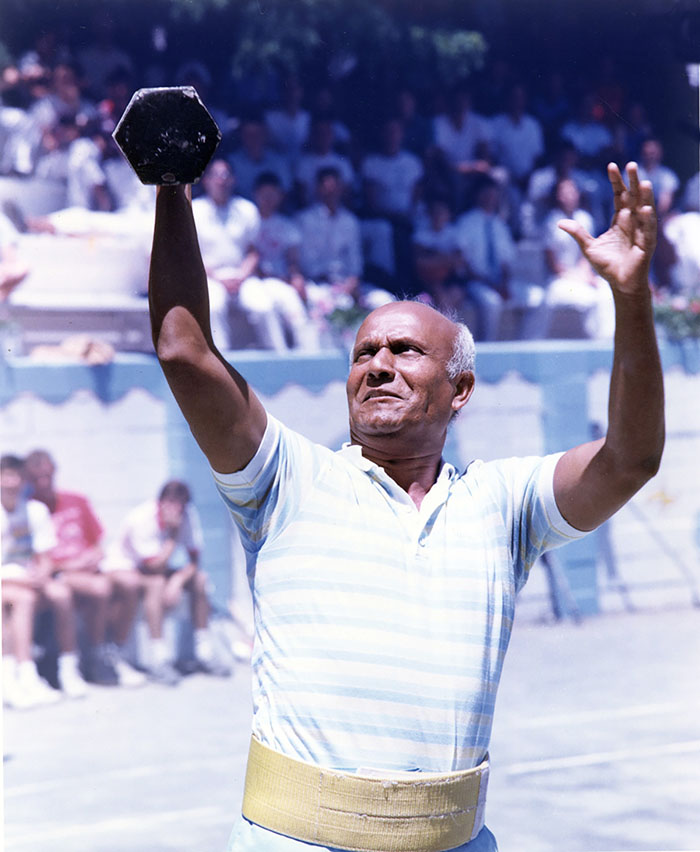 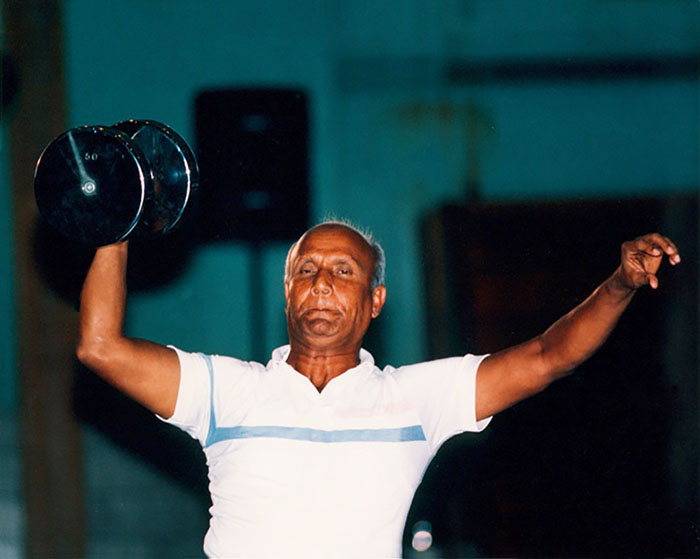 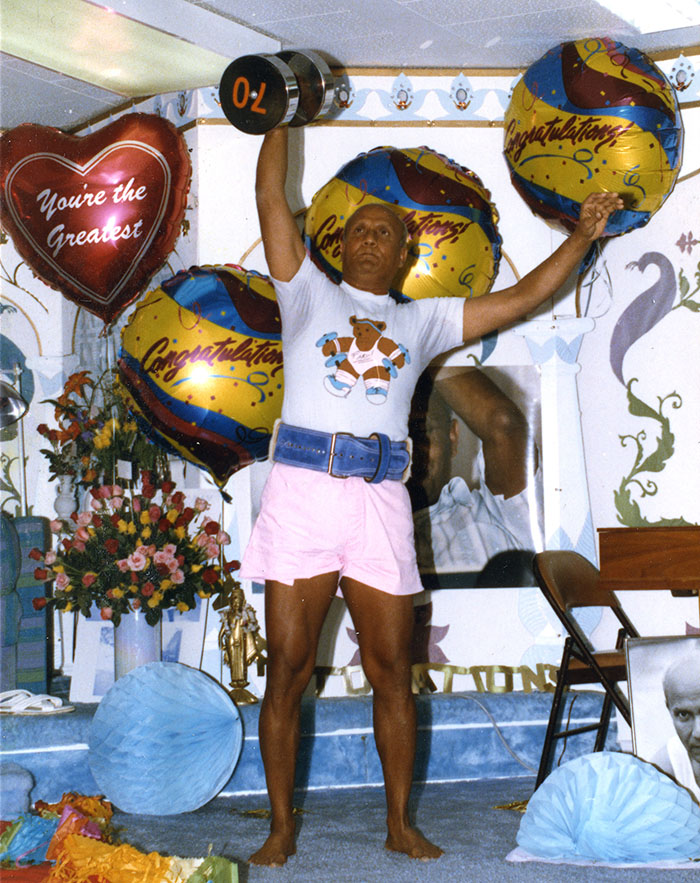 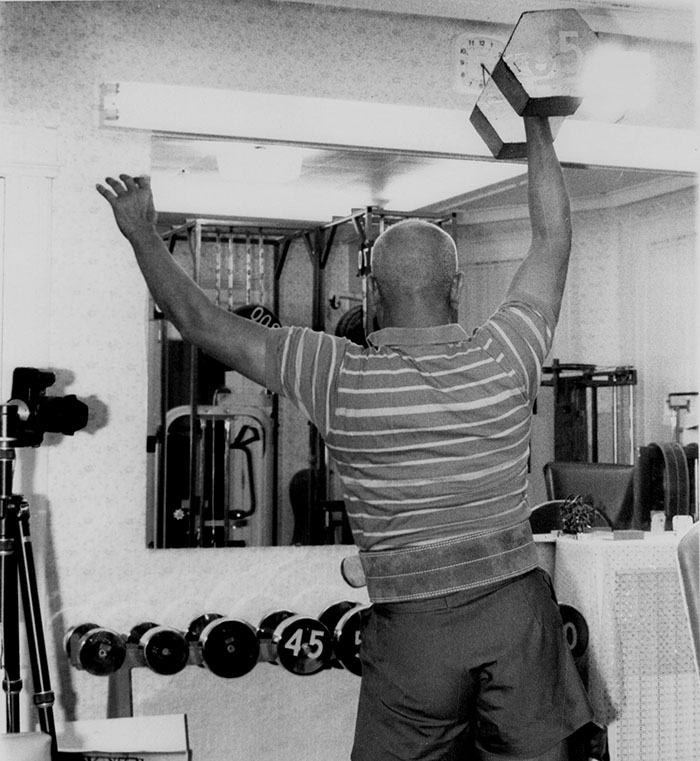 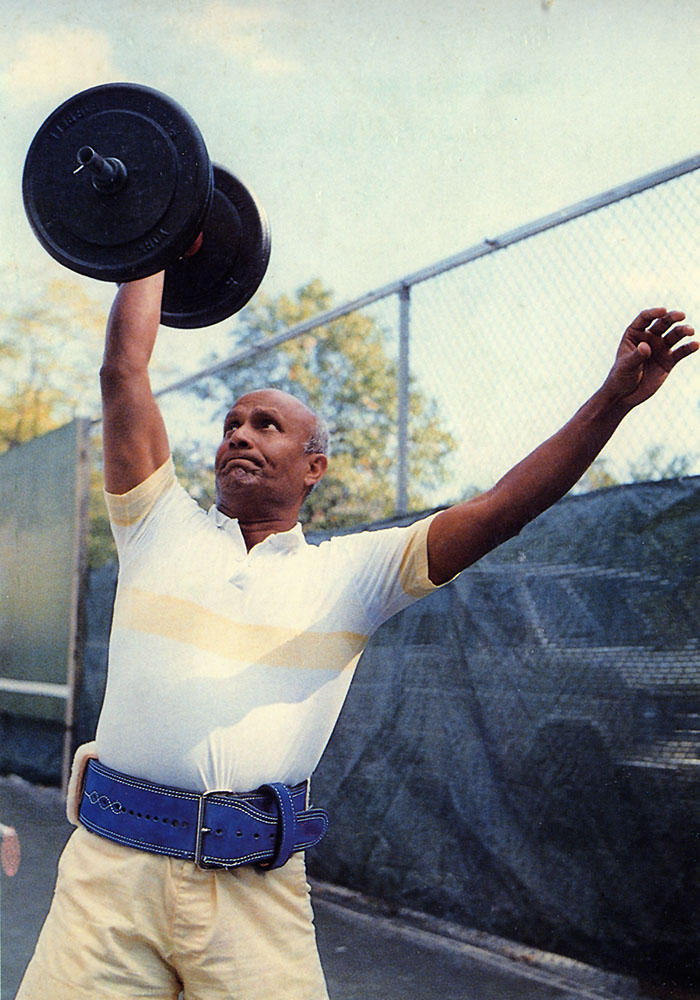 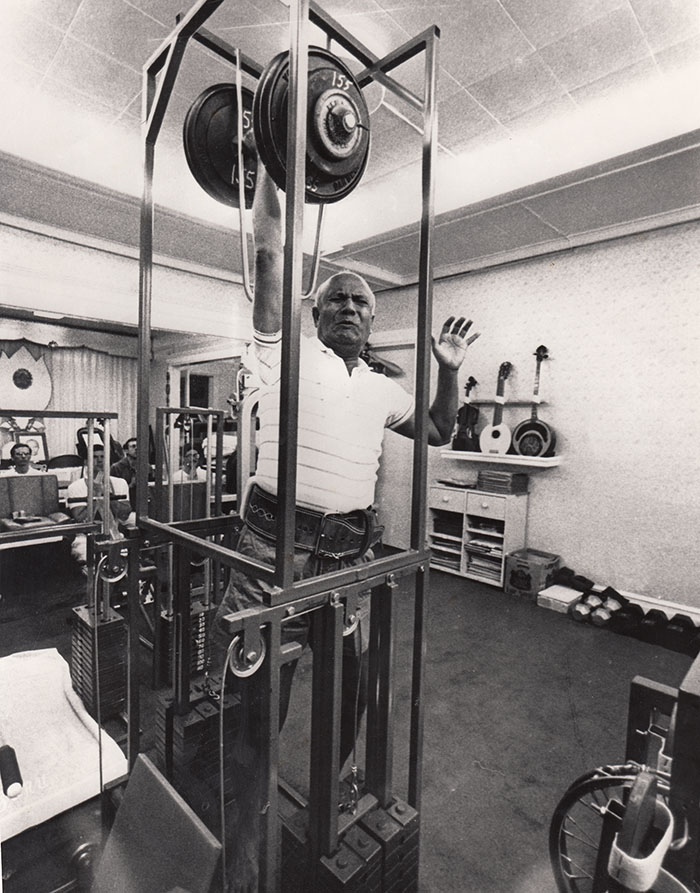 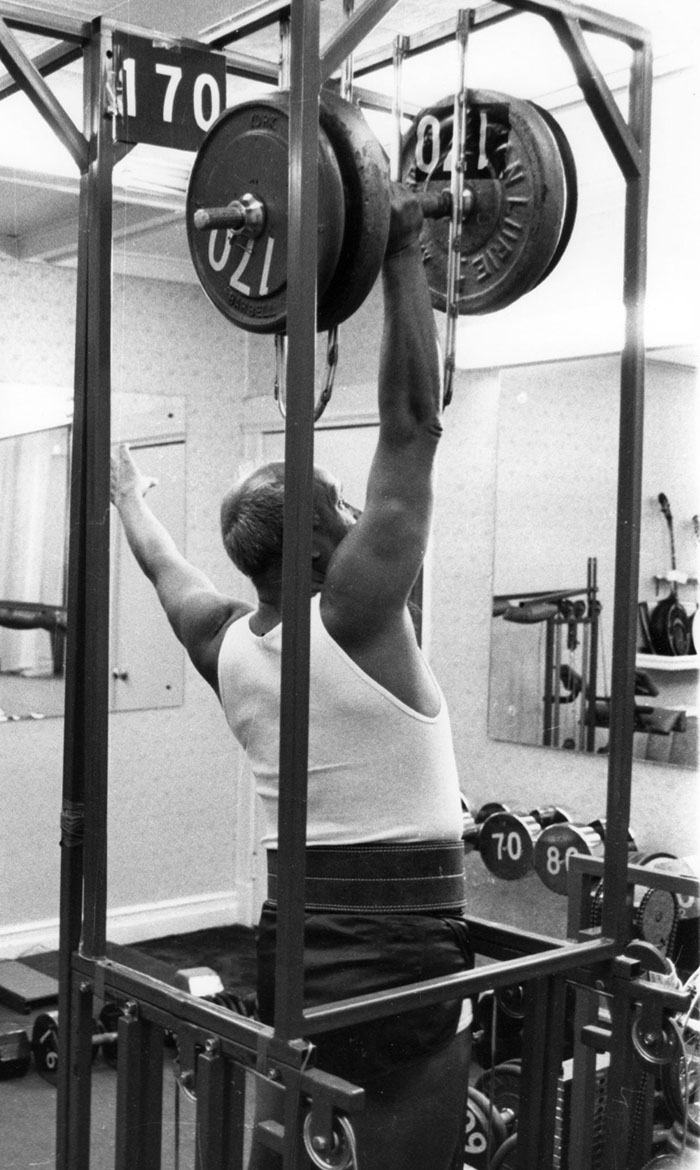 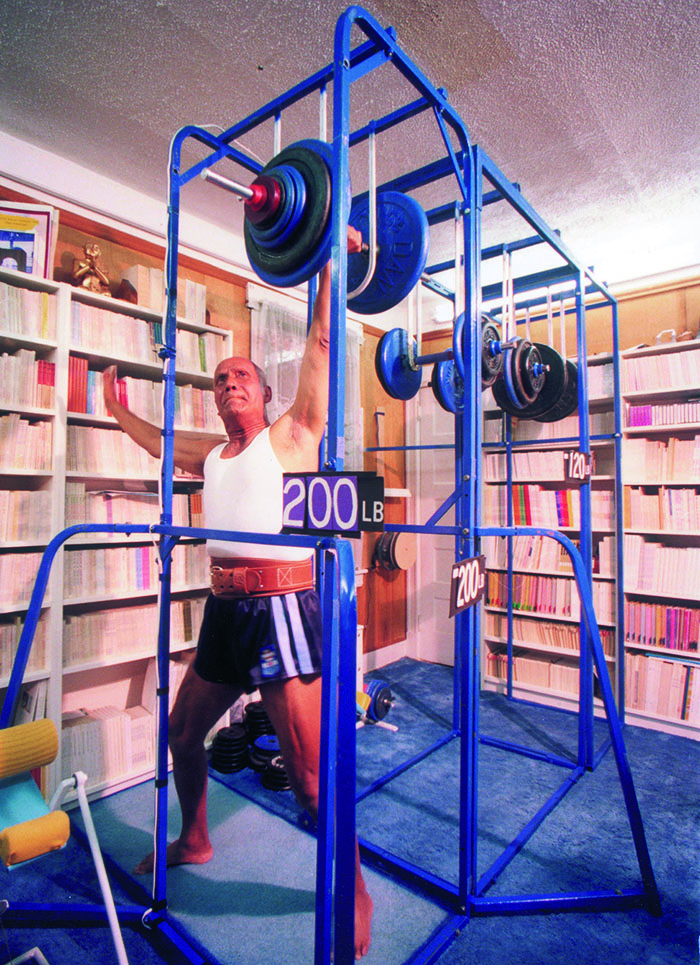 Sri Chinmoy achieves a lift of 200 lbs., using only his right arm, setting a new record for his weight (157 lbs.) and age (54 years), in Jamaica, New York. Later, Sri Chinmoy is awarded a Certificate of Recognition and Merit by the Amateur Athletic Union of the United States for his noteworthy achievement in lifting 200 pounds with one arm. A similar certificate is presented by the British Amateur Weightlifters Association. 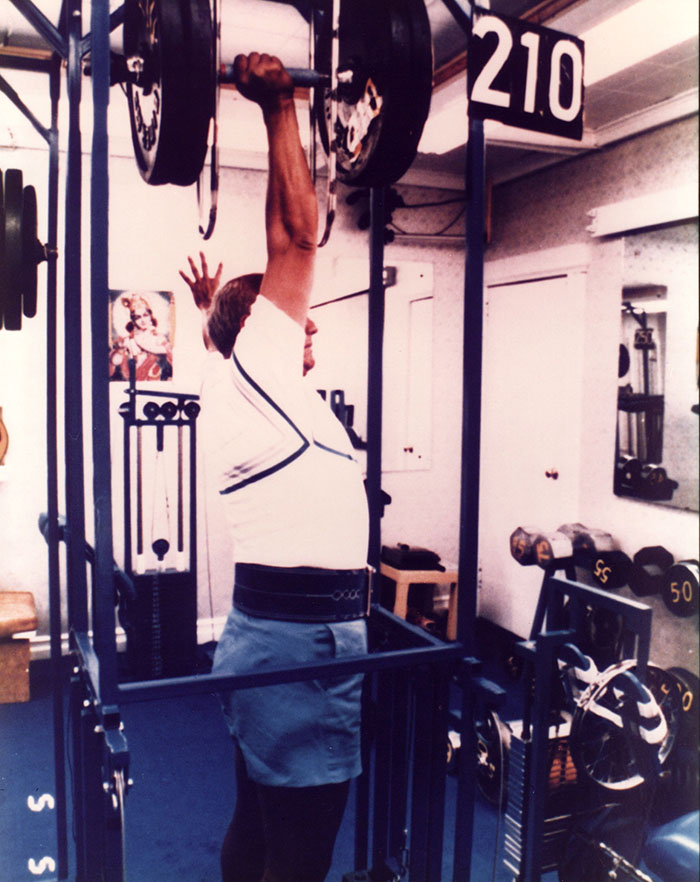 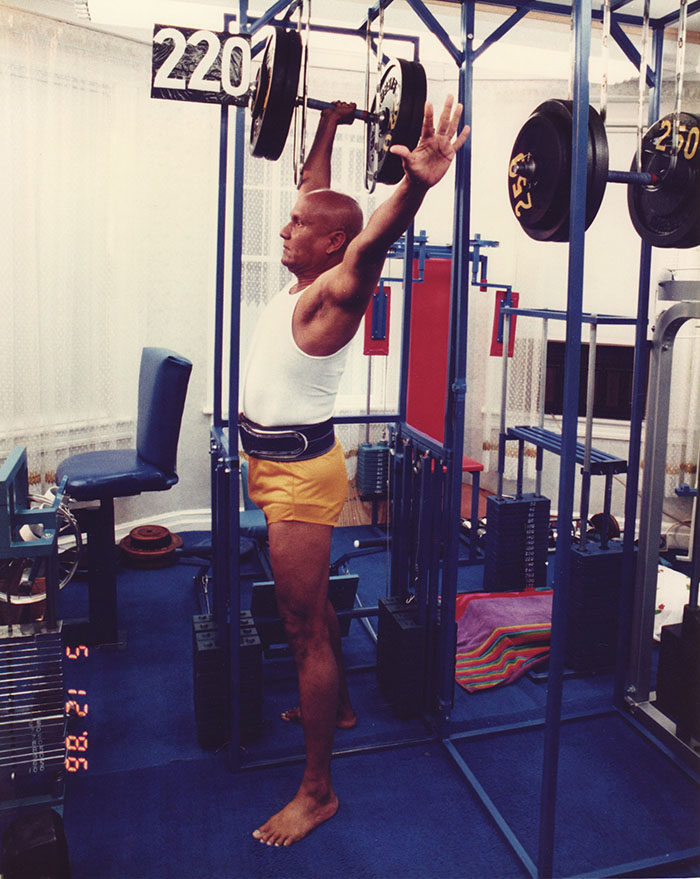 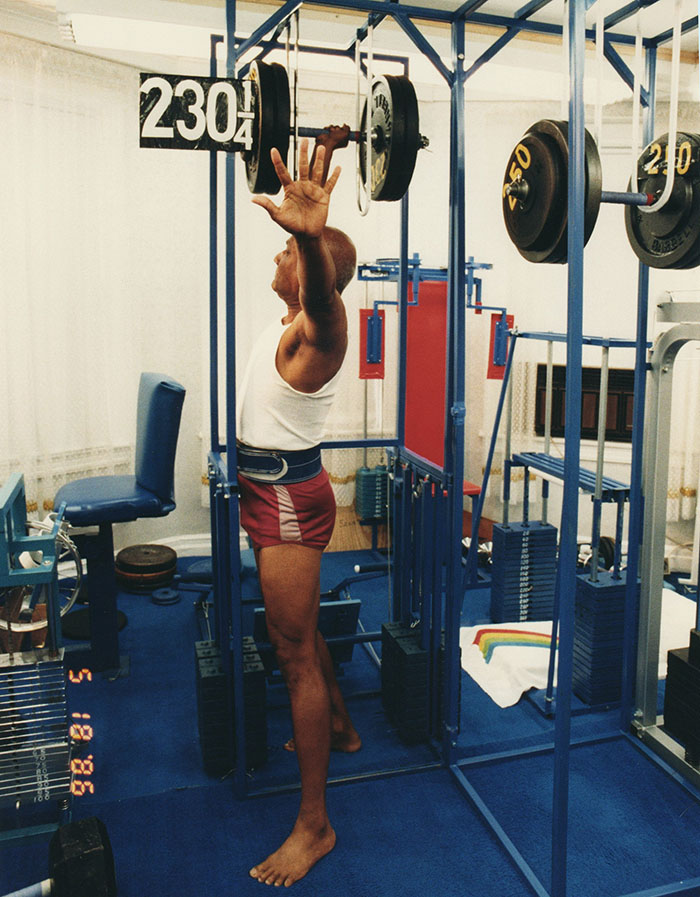 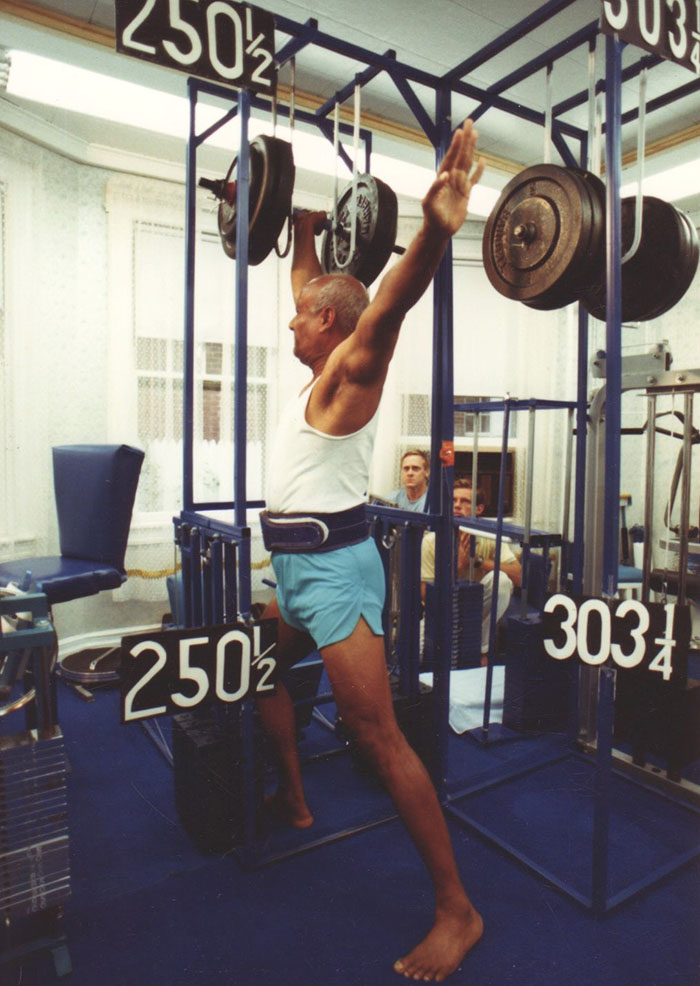 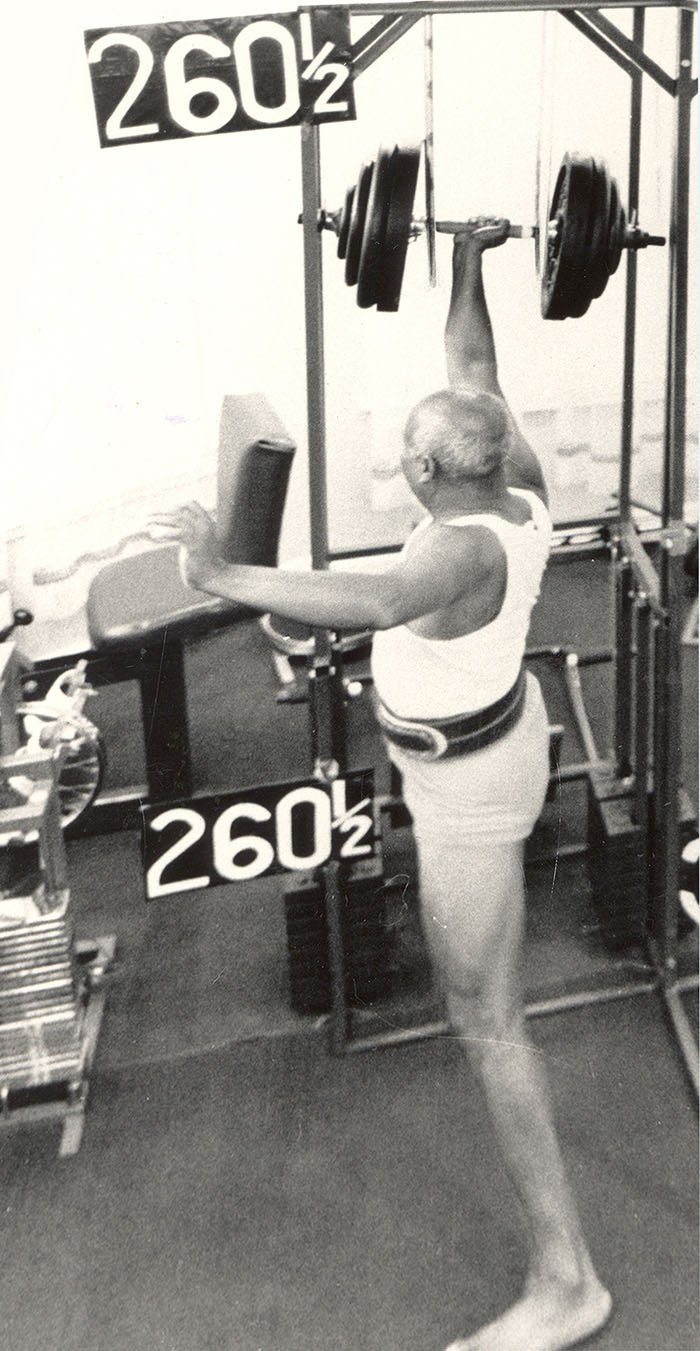 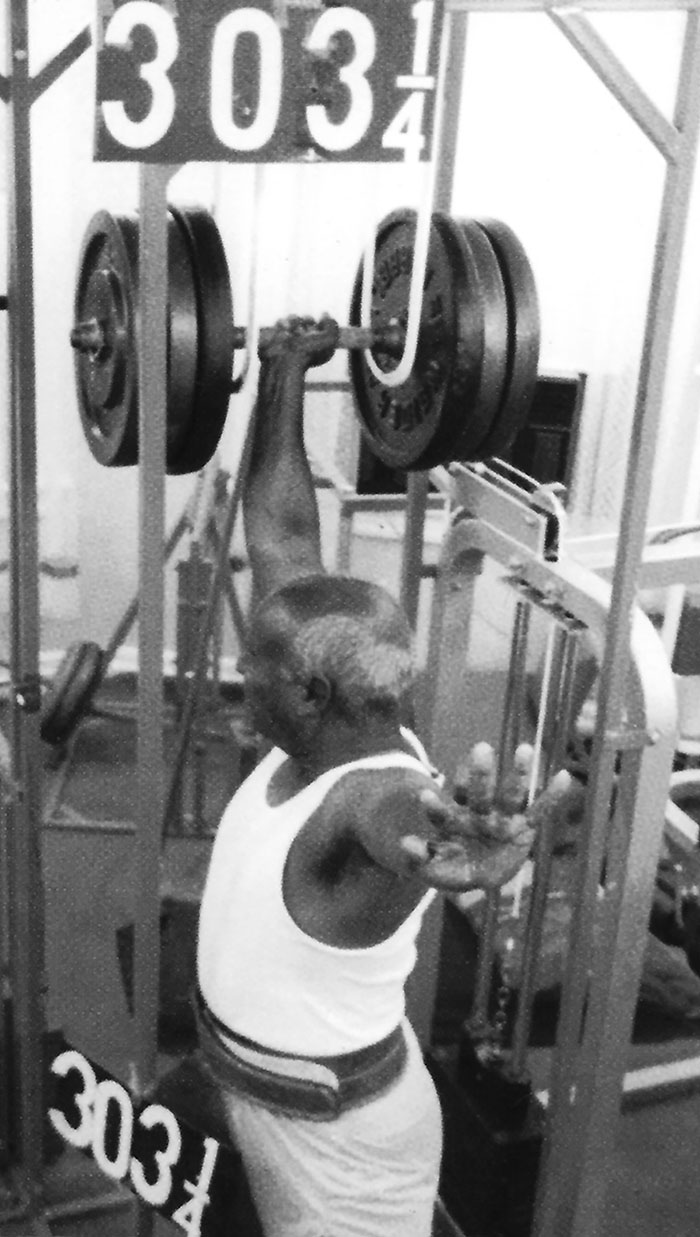 Sri Chinmoy achieves a lift of 303¼ lbs., using his right arm only, in Jamaica, New York. After his first attempt on 23 May 1986, Sri Chinmoy finally achieves the lift on his 214th attempt. Sri Chinmoy weighs 160 lbs.

I first tried lifting 300 pounds on May 23rd and I eventually succeeded on August 11th, after 80 days. It was my 214th attempt. Then I tried 313 pounds. I began on August 12th and I did it on August l9th — eight days later. Then I jumped to 320 pounds, which was double my body weight. I started the morning of August 21st, Agraha’s birthday, and I did it the afternoon of that same day. At his request I did it. Now I need a few more disciples’ birthdays to inspire me. It took a long time to go to 330 pounds — two weeks! But to reach 340 pounds it took only 12 attempts and for 350 ˝ pounds, just eight attempts. So my speed is increasing. I think I am still getting the benefit from attempting 300 pounds for two and a half months. — 11 September 1986

Published in My Weightlifting Tears and Smiles, part 1 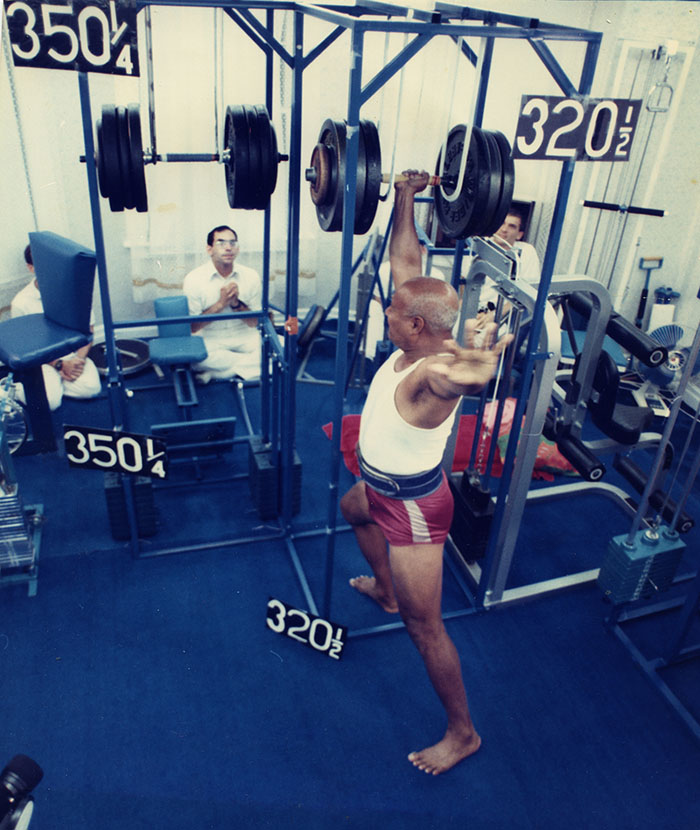 Sri Chinmoy lifts 330½ lbs. using only his right arm; and during a standing calf-raise workout, lifts a total of 106 tons, in Jamaica, New York. 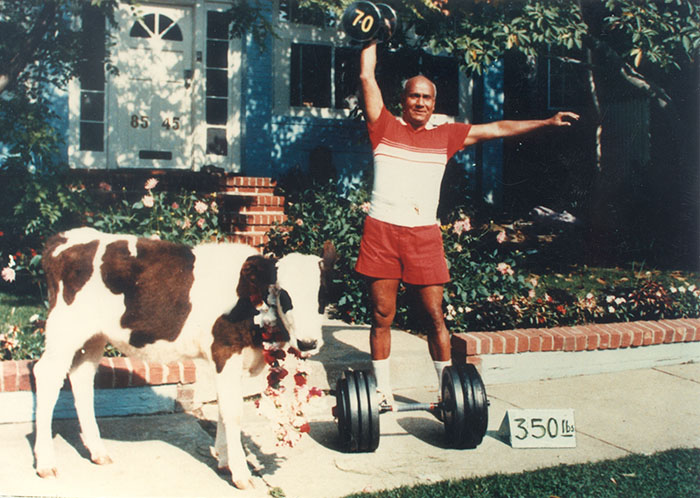 Sri Chinmoy outside his home in New York, easily holding a 70-lb weight. On the ground is the 350½-lb dumbbell he lifted earlier in the day using only his right arm and, as a comparison, a calf of the same weight stands nearby. 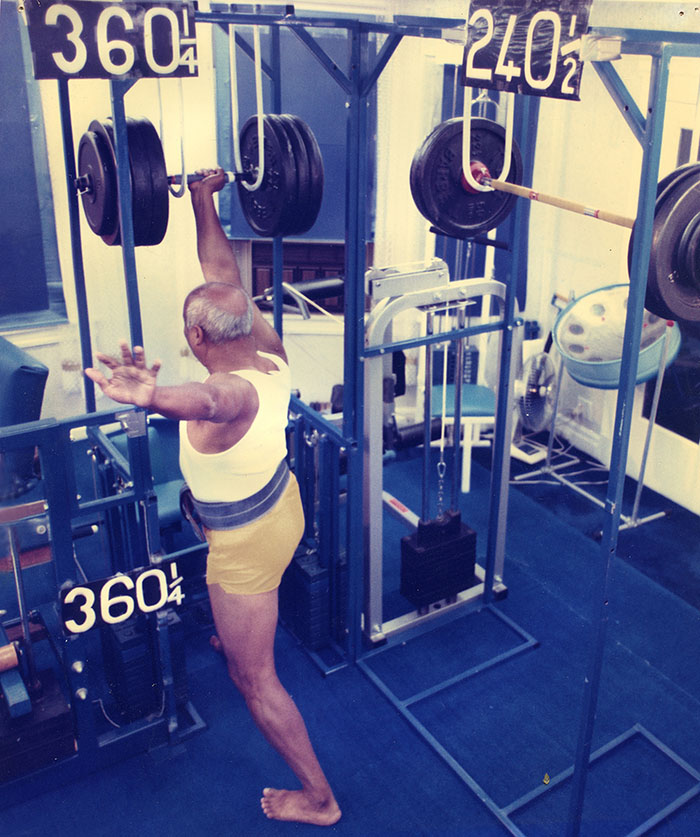 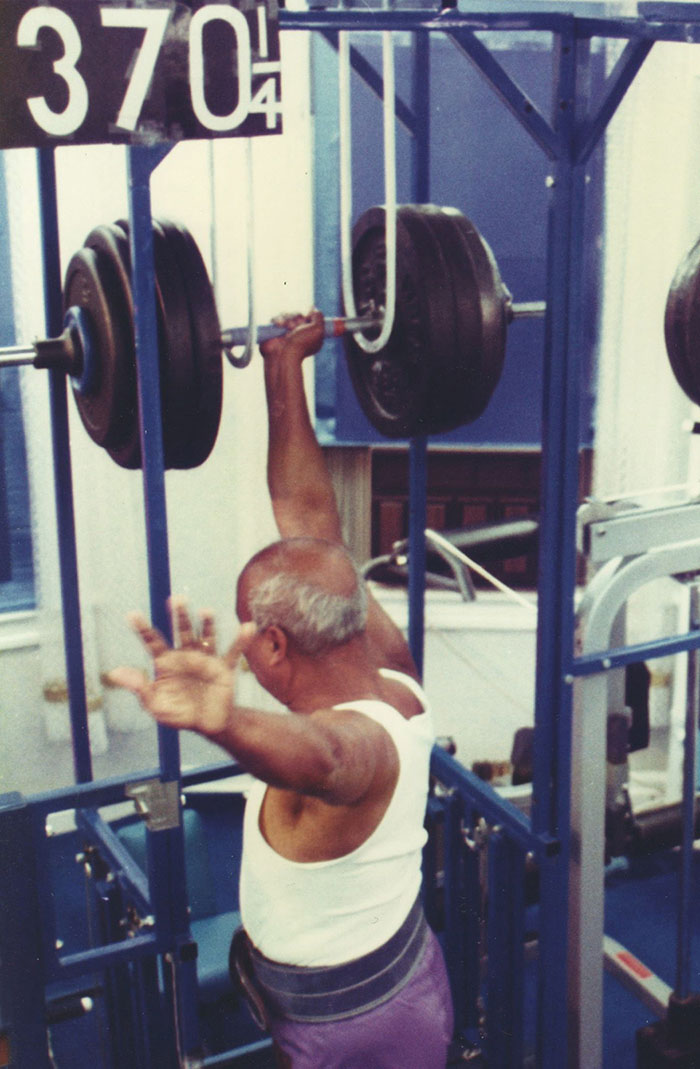 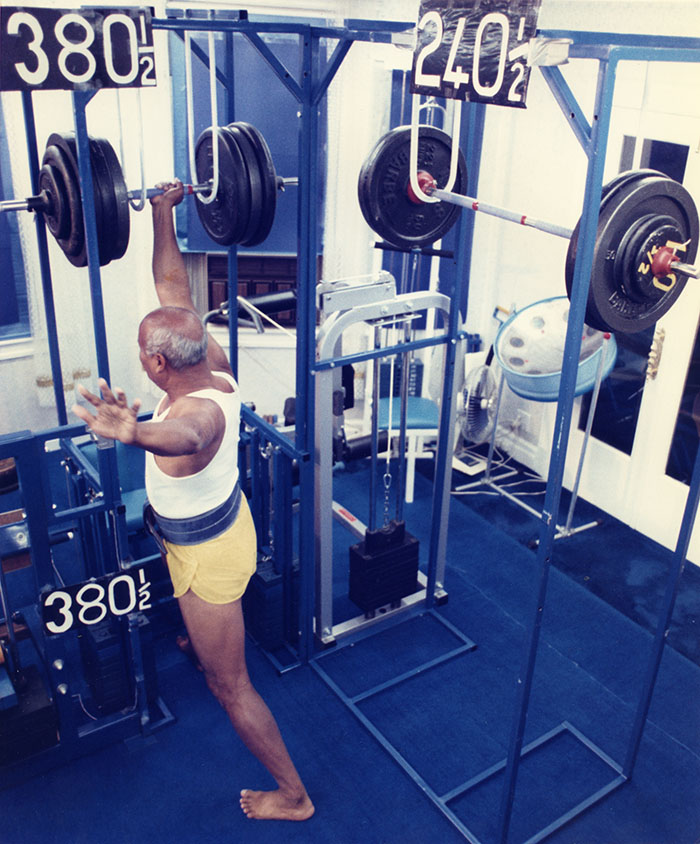 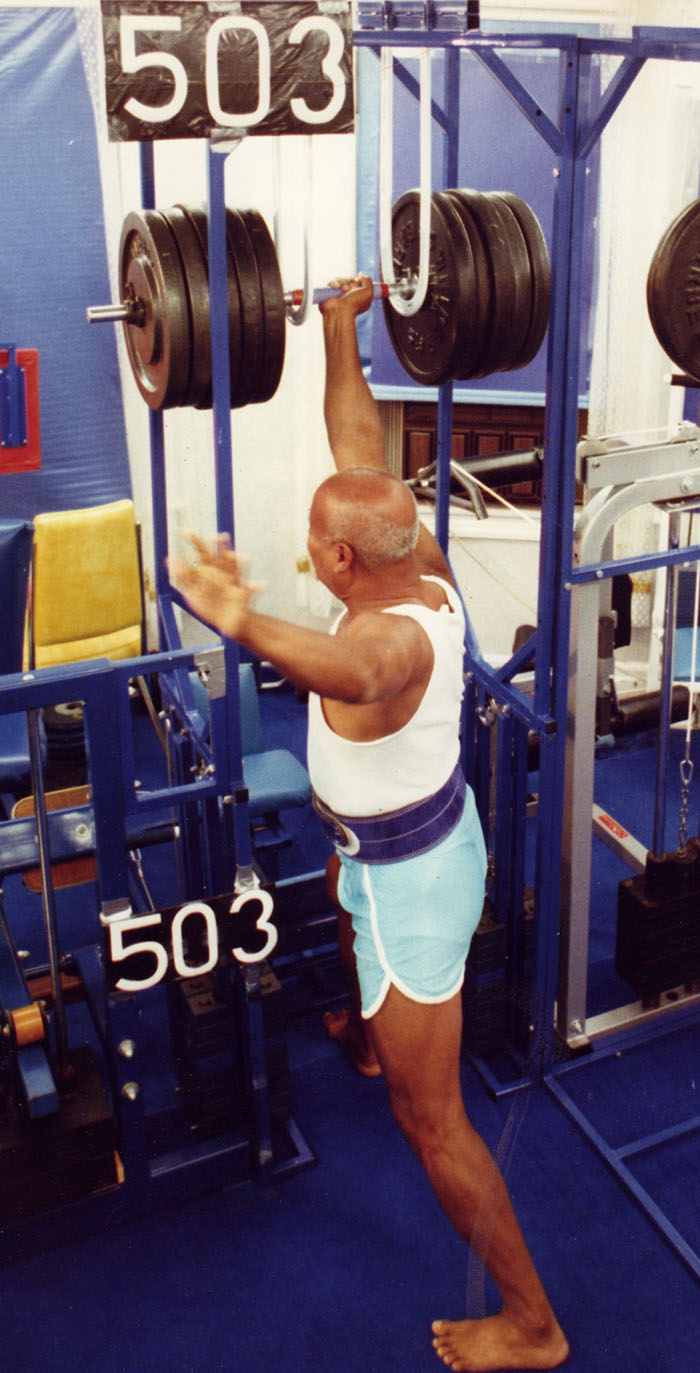 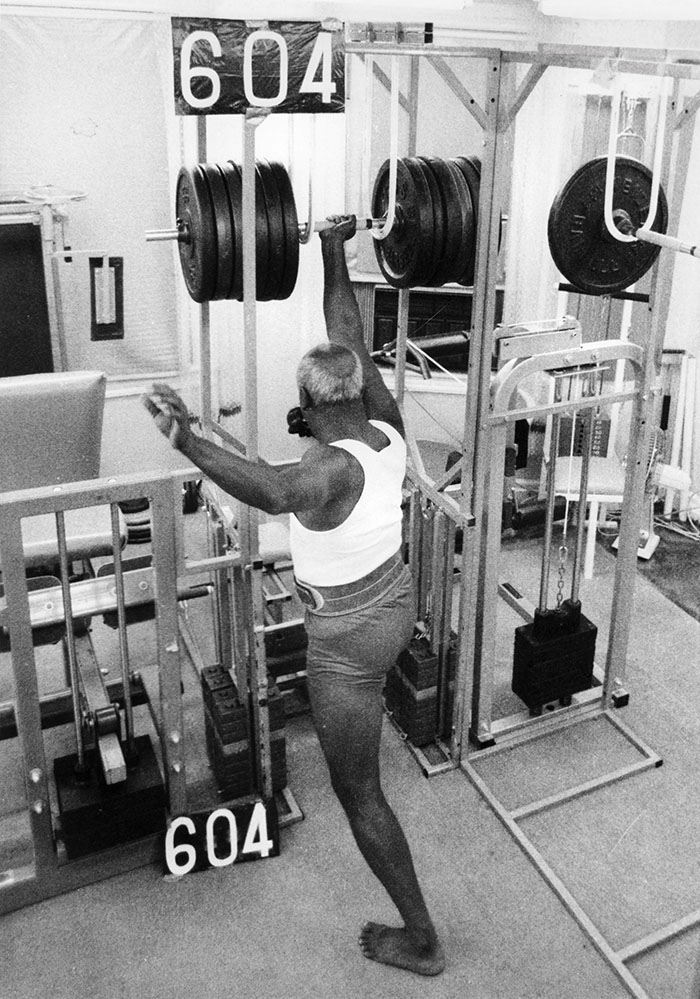 She Wanted Me To Do More

When I lifted 604 pounds with one arm, my physical mother appeared before me in the inner world, full of compassion, to watch. After the fourth attempt, she wanted me to do more. I said, “I am tired. I am satisfied with this.” — 27 October 1986 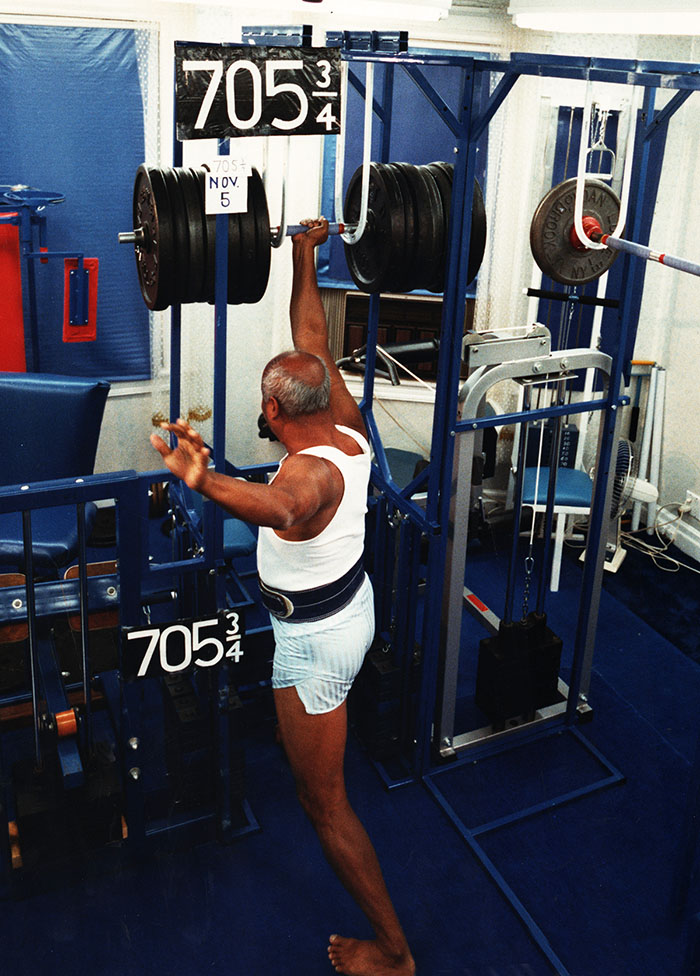 Help In Reaching My Goal

This morning I reached my ultimate goal — 705 pounds. I have done it with my Beloved Supreme’s infinite Grace. Just before I started lifting, my prayer was:

When human greed becomes His divine Need, then one can be of real inspiration and true service to mankind. So this was my prayer, and a few minutes after it was offered, I was able to lift 705 pounds.

When I lift, there is always some divine Grace in the form of gods, goddesses or relatives and friends who come to inspire me. They are of real help. Today it was my dearer-than-the-dearest Mother Kali who came. Inside me she is always visible, but today I saw her very vividly on the wall, where the window is. She had a larger-than-the-largest garland around her neck. I saw it when I was lifting. On my third attempt she was looking at me so powerfully and compassionately. On my fourth attempt I clearly saw her placing her feet on the metal plates and the bar. Then I saw in my intuitive world that I was going to lift it. On that attempt, I was looking only at her face. My concentration was so powerful at that time, I didn’t see the garland, and I was wondering where it went. Then, in my highest point of concentration, I saw that the garland was on my neck. Then I made the attempt and I was successful. She had garlanded me before I had actually made the lift. Then I lifted it again on my fifth attempt. After that she was playing with the garland she had placed on me.

Now I can cut jokes. About a month ago some of the disciples didn’t have faith that I would be able to lift 700 pounds. I said I would put them into garbage bags. So many disciples I put in garbage bags! Today I can open up the garbage bags and release them. 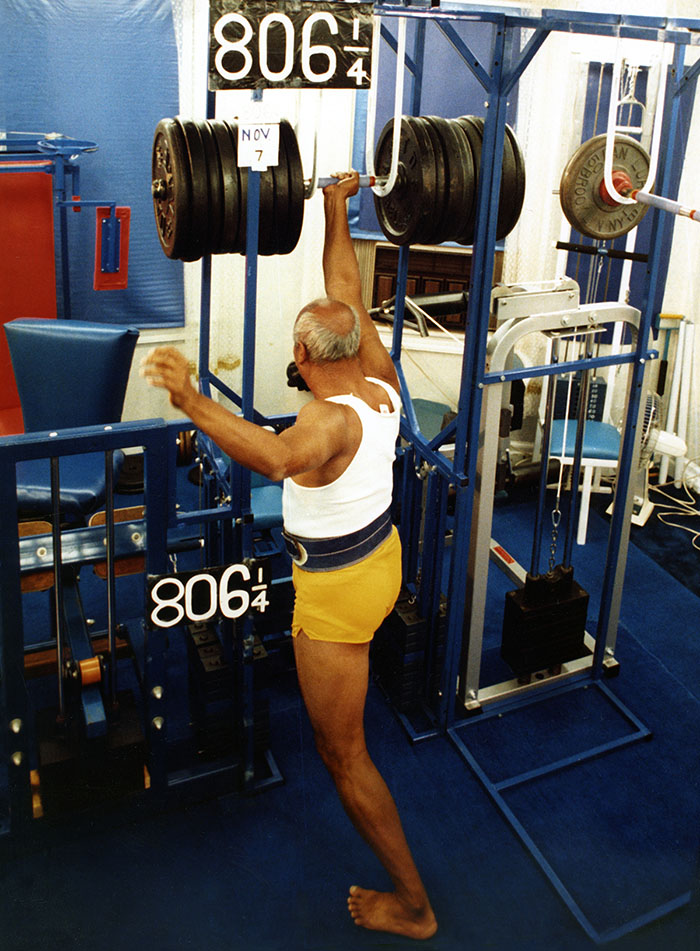 All Credit To Mother Kali

So for both 700 and 800 pounds, all credit goes to my dearest Mother Kali. 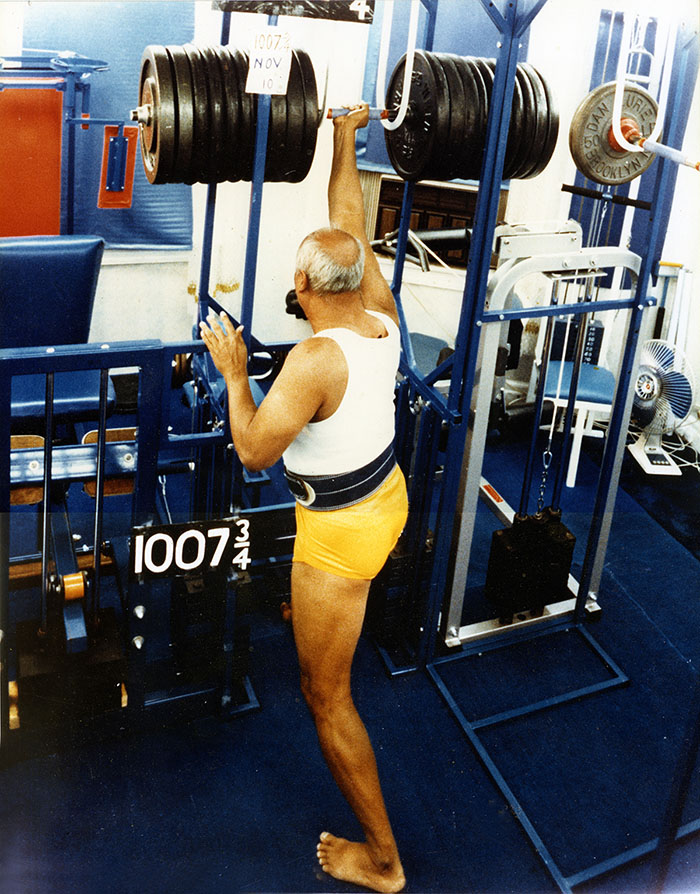 A Visit from Nivedita

Early this morning while I was taking exercise, Mother Kali and the soul of my physical mother were there. The soul of Nivedita was also there for at least 45 minutes.

These visions are more real to me than my own name, Chinmoy. Chinmoy is just a fleeting name, an earthly name. But my God-realisation-experiences, visions and illuminations, which come from my Beloved Supreme’s infinite Compassion, are infallible and immortal. 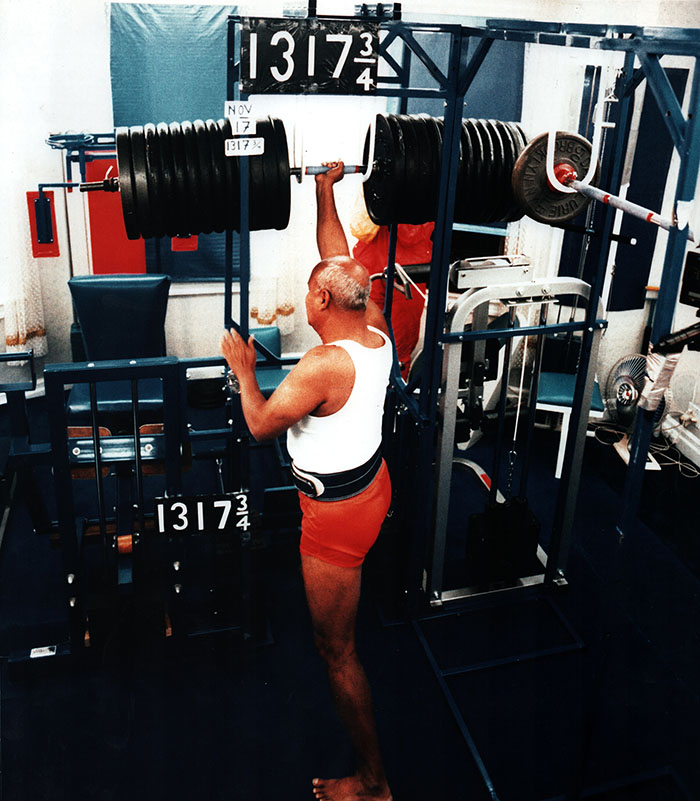 Mother Kali Is Always There

When I was lifting 1,317¾ pounds with one arm, again Mother Kali came! Mother Kali is always there.

Published in My WeightliftingTears and Smiles, part 2 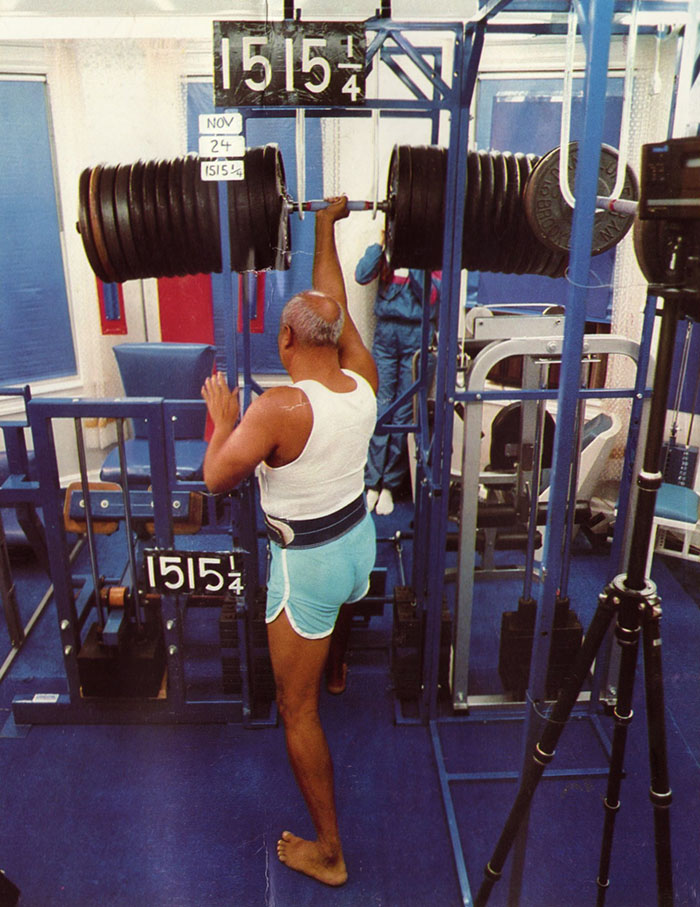 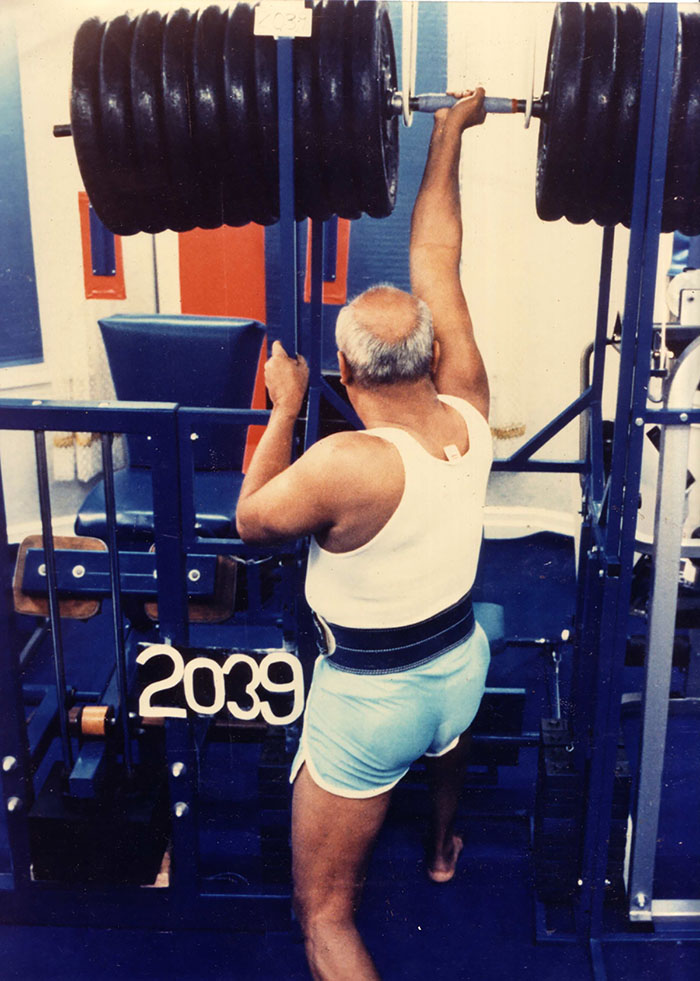 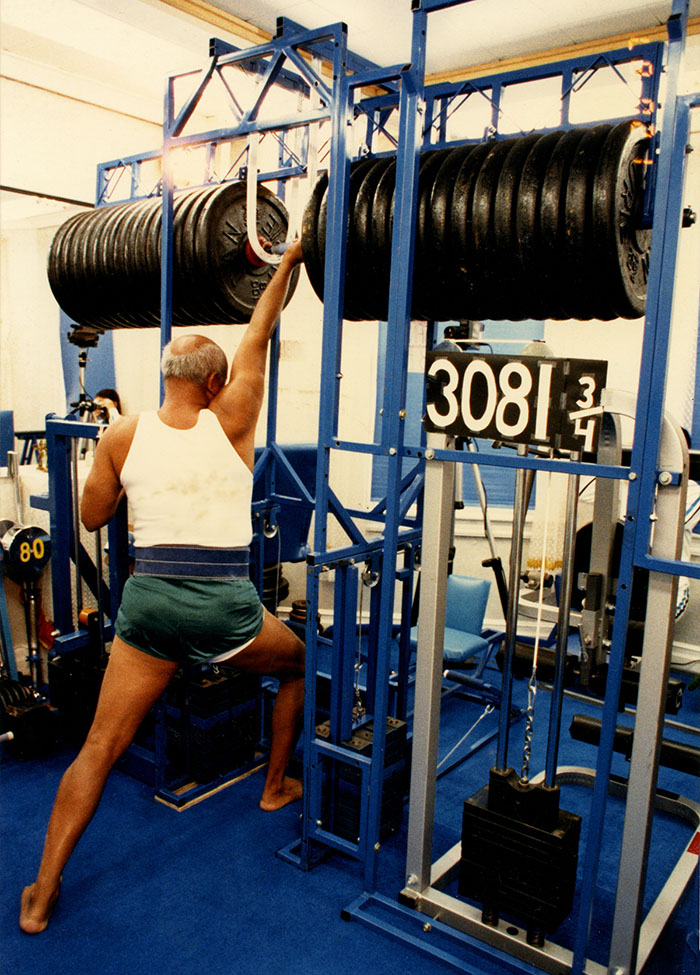 Sri Chinmoy lifts 3,081¾ lbs. using only his right arm, in Jamaica, New York. The lift is approximately 19 times his own bodyweight. 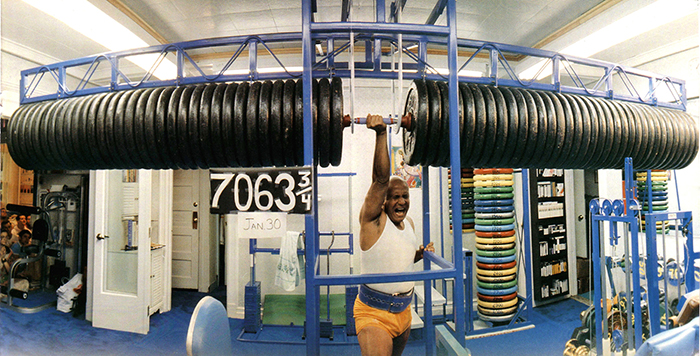 The dates cited are the official dates of Sri Chinmoy's lifts. However, very occasionally he would lift the same weight again a day or so later for a public demonstration, or for a clearer photograph to be taken. A case in point is his 106¾-pound lift, which he had done on 9 October. On 11 October, a photograph was taken in front of an audience at Aspiration-Ground.