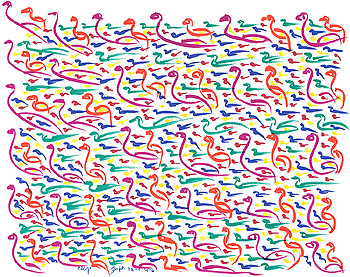 To devote oneself to a single thing in life, one noble undertaking, with every fibre of one’s being, to exhibit an intensity of purpose that excludes all other themes and subjects – how many human beings can maintain that commitment? Perhaps the very definition of a genius is someone who is so obsessed by a single pursuit that it consumes him. Then it becomes a magnificent obsession and he is compelled to follow it to its glorious conclusion.

Inspiration visits many creative artists in its diverse hues and colours, but there are certain individuals in whom inspiration repeatedly comes in the same form. Choice of theme and subject is no longer theirs to make. They are compelled to explore and celebrate the same theme over and over.

Among painters, we can trace this kind of magnificent obsession in the works of Vincent Van Gogh who revealed, “The cypresses are always in my thoughts.”

Similarly, Claude Monet echoes, “These landscapes of water and reflections have become an obsession.”

And in this century we have the towering presence of Sri Chinmoy with his bird drawings numbering more than fifteen million. Sri Chinmoy’s obsession with birds began quietly. In December 1991, he was on vacation in Malta with some of his students. One day he took up a small, square pad of telephone jotting paper and rapidly drew a single bird on every page using a ballpoint pen. Each bird was composed of barely two or three sweeping lines and the dot of an eye. His principal concern was not to accurately render the anatomy and outer characteristics of the birds, but to convey their essence. There were hints of species, certainly – the long neck of a swan, the rounded softness of a sparrow, the raised crest of a cockatoo, the extended beak of a kingfisher. There were birds in flight, birds that craned forwards, or peered elusively from behind the curve of a wing. But there was something very different about these birds. It was as if they were the outer notations of a mysterious inner language.

As Sri Chinmoy’s signature style developed, he began to create landscapes composed entirely of birds. Over the years, he has drawn thousands of birds on a daily basis, using felt tip markers, crayons, coloured ballpoint pens and acrylic paint pens. But the form of the birds themselves has remained essentially the same. Sri Chinmoy draws his birds at great speed and with flawless execution. The slow deliberations of a halting line, the time spent erasing a mark once it has been made on the page, the concept of filling in a blank space with painstaking cross-hatching or shading – all this is foreign to him.

To a Western artist, perhaps, Sri Chinmoy’s technique would be an anathema, but not to a master Chinese calligrapher, for example. Such artists are venerated because they meditate for hours before committing their brush to paper. Once they start to paint a character, they complete it in a single, uninterrupted motion.

Sri Chinmoy uses the same kind of meditative approach. When one interviewer asked him, “Do you have a bird in mind when you draw?” he replied,

“I have nothing in mind. I try to keep my mind as empty, vacant and tranquil as possible. The outer mind is like the surface of the sea. On the surface, the sea is full of waves and surges; it is all restlessness. But when we dive deep below, the same sea is all calmness and quiet. It is there that we find the source of creativity.”

Because these birds are not the products of the mind, there is an intriguing simplicity about them, a graphic purity in their appearance. True, they seem to lie flat on the surface of the page. There is no depth of perspective in their portrayal and yet they are not static. There is an almost musical rhythm in their positioning, in the interplay of lines and space. The great philosopher Lao Tzu once wrote:

“Thirty spokes converge towards the hub, but it is the space between them that forms the essence of the wheel… This is the rule. The material harbours usefulness, and the immaterial imparts the true essence.”

Sri Chinmoy engenders the essence of each bird as much through the spaces between the lines as he does through his ever-shifting combination of curved, wavy, elongated, angular and flicking lines.

Moreover, the dynamic movement by which they are created is somehow transferred to the birds. They are like energy fields, pulsing with life. Nor are the birds tethered to the page by details of scenery. They exist alone in a white space, free from embellishments of any kind. This isolation makes them seem more truly notations, or seismographs, of an inner meaning. Sri Chinmoy has blurred the distinctions between art, ideographic writing and calligraphy with his ethereal creations.

Like many a creative artist before him, this gift appears to be self-born rather than the product of artistic training and accepted shibboleths. He reflects that he studied a little art in school around 1944, but never had any real instruction. He adds, “Everything I do is entirely the result of God’s Grace. I get all my inspiration from God.”

Again, it is becoming increasingly manifest that while this artist pays no heed to fashion, his style of drawing may itself become fashionable. Recent exhibits of his works in Paris, London and Vienna have garnered considerable acclaim. But the primary interest in his work is undoubtedly focussed on the fact that he has reduced the symbolic landscape to one element – the bird.

Sri Chinmoy has frequently been asked to explain the symbolism of his birds. He replies:

“I am a man of prayer and meditation. For me, birds have a very special significance on a spiritual level. They fly in the sky, and the sky is all freedom. So when the birds fly in the sky, they remind me of the soul’s infinite freedom. The soul has come from Heaven. When we think of birds, we are also reminded of our Source, and this gives us enormous joy. I feel that if people come here to view these birds, their inner hunger to fly in the sky of infinite freedom will be fed.

In another interview, he made a direct connection between this inner freedom and peace: “Each bird reminds me of freedom, and I feel that freedom lies in peace and nowhere else.” Hence, the beautiful name by which Sri Chinmoy’s bird drawings are known: “Dream-Freedom-Peace-Birds.”

“It is good to know that you, who have such a great following, can bequeath the world so many drawings and sketches. We have become so addicted to the camera that we have forgotten how the ancient travellers entered their impressions on a notebook, both graphically and verbally. I congratulate you on this wonderful achievement, which transports us men, who would be winged, to the birds, which we have tried to emulate.”