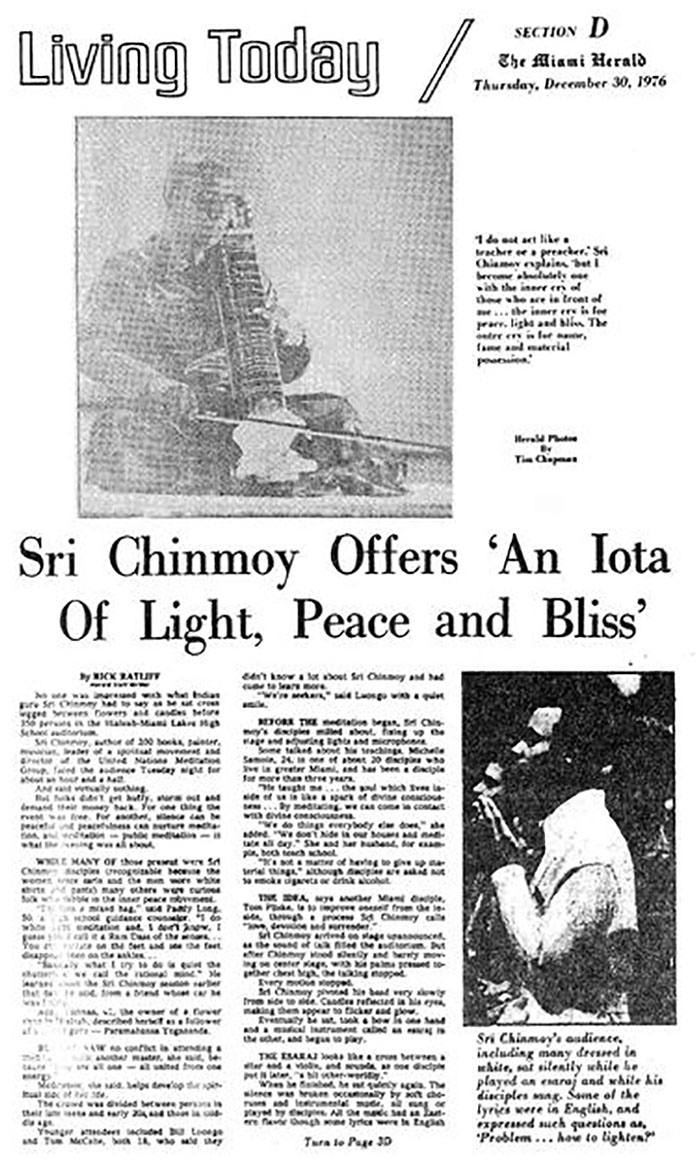 Sri Chinmoy offers ‘An Iota Of Light, Peace and Bliss’

‘I do not act like a teacher or a preacher.’ Sri Chinmoy explains, ‘but I become absolutely one with the inner cry of those who are in front of me ... the inner cry is for peace, light and bliss. The outer cry is for name, fame and material possession.’

No one was impressed with what Indian guru Sri Chinmoy had to say as he sat cross legged between flowers and candles before 350 persons in the Hialeah-Miami Lakes High School auditorium.

Sri Chinmoy, author of 300 books, painter, musician, leader of a spiritual movement and director of the United Nations Meditation Group, faced the audience Tuesday night for about an hour and a half.

And said virtually nothing.

But folks didn't get huffy, storm out and demand their money back. For one thing the event was free. For another, silence can be peaceful and peacefulness can nurture meditation. and meditation — public meditation — is what the evening was all about.

WHILE MANY OF those present were Sri Chinmoy disciples (recognizable because the women wore saris and the men wore white shirts and pants) many others were curious folk who dabble in the inner peace movement.

"I’m into mixed bag," said Paddy Long, 50, a high school guidance counsellor. "I do white light meditation and, I don’t know, I guess you’d call it a Ram Dass of the senses... You concentrate on the feet and see the feet disappear then on the ankles...

"Basically what I try to do is quiet the chatterbox we call the rational mind.” He learned about the Sri Chinmoy session earlier that day he said, from a friend whose car he was fixing.

Addy Farinas, 41, the owner of a flower shop in Haileah, described herself as a follower of another guru — Paramahansa Yogananda.

BUT SHE SAW no conflict in attending a meditation with another master, she said, because they are all one — all united from one energy.

Meditation, she said, helps develop the spiritual side of her life.

The crowd was divided between persons in their late teens and early 20s, and those in middle age.

Younger attendees included Bill Luongo and Tom McCabe, both 18, who said they didn’t know a lot about Sri Chinmoy and had come to learn more.

BEFORE THE meditation began. Sri Chinmoy’s disciples milled about, fixing up the stage and adjusting lights and microphones.

Some talked about his teachings. Michelle Samole, 24, is one of about 20 disciples who live in greater Miami, and has been a disciple for more than three years.

"We do things everybody else does," she added. “We don’t hide in our houses and meditate all day." She and her husband, for example, both teach school.

“It’s not a matter of having to give up material things,” although disciples are asked not to smoke cigarets or drink alcohol.

THE IDEA, says another Miami disciple, Tom Pliske, is to improve oneself from, the inside, through a process Sri Chinmoy calls "love, devotion and surrender."

Sri Chinmoy arrived on stage unannounced, as the sound of talk filled the auditorium. But after Chinmoy stood silently and barely moving on center stage, with his palms pressed together chest high, the talking stopped.

Sri Chinmoy pivoted his head very slowly from side to side. Candles reflected in his eyes, making them appear to flicker and glow.

Eventually he sat, took a bow in one hand and a musical instrument called an esraj in the other, and began to play.

THE ESARAJ looks like a cross between a sitar and a violin, and sounds, as one disciple put it later, "a bit other-worldly."

When he finished, he sat quietly again. The silence was broken occasionally by soft choruses and instrumental music, all sung or played by disciples. All the music had an Eastern flavor though some lyrics were In English.

[The article is continued on page 30. However, the transcript is  currently unavailable.]

Caption: Sri Chinmoy audience, including many dressed in white, sat silently while he played an esraj and while his disciples sang. Some of the lyrics were in English, and expressed such questions as, “Problem ... how to lighten?” 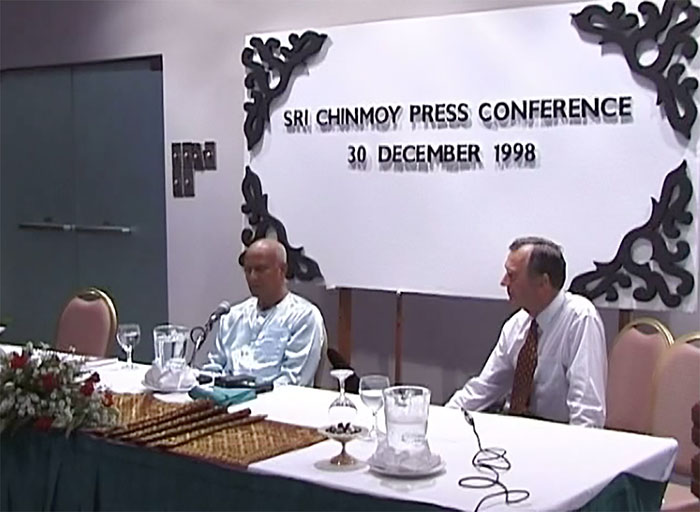 Sri Chinmoy at a press conference in Kuala Lumpur, Malaysia.