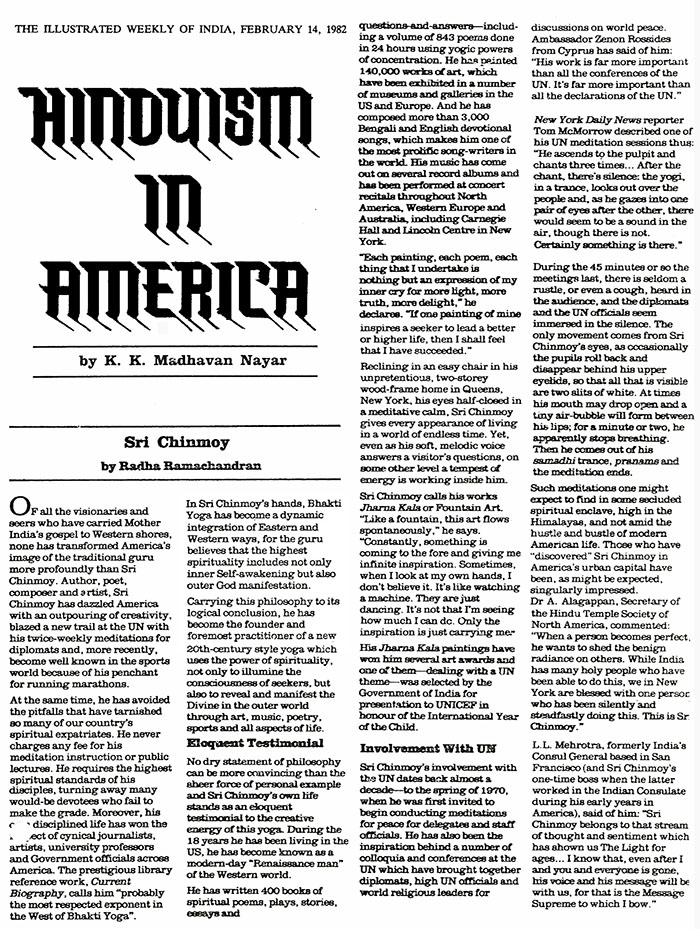 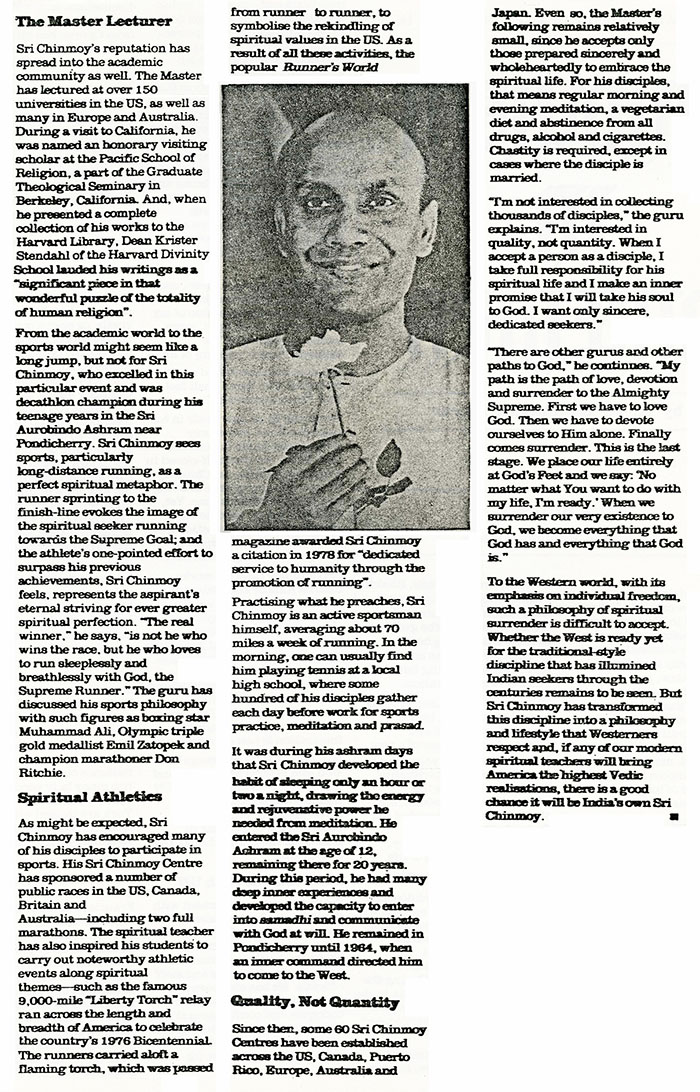 OF all the visionaries and seers who have carried Mother India’s gospel to Western shores, none has transformed America’s image of the traditional guru more profoundly than Sri Chinmoy. Author, poet, composer and artist, Sri Chinmoy has dazzled America with an outpouring of creativity, blazed a new trail at the UN with his twice-weekly meditations for diplomats and, more recently, become well known in the sports world because of his penchant for running marathons.

At the same time, he has avoided the pitfalls that have tarnished so many of our country’s spiritual expatriates. He never charges any fee for his meditation instruction or public lectures. He requires the highest spiritual standards of his disciples, turning away many would-be devotees who fail to make the grade. Moreover, his own  disciplined life has won the respect of cynical journalists, artists, university professors and Government officials across America. The prestigious library reference work, Current Biography, calls him “probably the most respected exponent in the West of Bhakti Yoga.”

In Sri Chinmoy’s hands, Bhakti yoga has become a dynamic integration of Eastern and Western ways, for the guru believes that the highest spirituality includes not only inner Self-awakening but also outer God manifestation.

Carrying this philosophy to its logical conclusion, he has become the founder and foremost practitioner of a new 20th-century style yoga which uses the power of spirituality, not only to illumine the consciousness of seekers, but also to reveal and manifest the Divine in the outer world through art, music, poetry, sport and all aspects of life.

No dry statement of philosophy can be more convincing than the sheer force of personal example and Sri Chinmoy’s own life serves as an eloquent testimonial to the creative energy of this yoga. During the 18 years he has been living in the US, he has become known as a modern-day “Renaissance Man” of the Western world.

He has written 400 books of spiritual poems, plays, stories, essays and questions-and-answers — including a volume of 843 poems done in 24 hours using yogic powers of concentration. He painted 140,000 works of art, which have been exhibited in a number of museums and galleries in the US and Europe. And he has composed more than 3,000 Bengali and English devotional songs, which makes him one of the most prolific song-writers in the world. His music has come out on several record albums and has been performed at concert recitals throughout North America, Western Europe and Australia, including Carnegie Hall and Lincoln Centre in New York.

“Each painting, each poem, each thing that I undertake is nothing but an expression of my inner cry for more light, more truth, more delight,” he declares.“If one painting of mine inspires a seeker to lead a better or higher life, then I shall feel that I have succeeded.”

Reclining in an easy chair in his unpretentious, two-storey wood-frame home in Queens, New York, his eyes half-closed in meditative calm, Sri Chinmoy gives every appearance of living in a world of endless time. Yet, even as his soft, melodic voice answers a visitor’s questions, on some other level a tempest of energy is working inside him.

Sri Chinmoy calls his works Jharna-Kala or Fountain Art. “Like a fountain, this art flows spontaneously,” he says. “Constantly, something is coming to the fore and giving me infinite inspiration. Sometimes, when I look at my own hands, I don’t believe it. It’s like watching a machine. They are just dancing. It’s not that I am seeing how much I can do. Only the inspiration is just carrying me.”

His Jharna-Kala paintings have won him several art awards and one of them — dealing with a UN theme — was selected by the Government of India for presentation to UNlCEF in honour of the International Year of the Child.

Sri Chinmoy’s involvement with the UN dates back almost a decade — to the spring of 1970, when he was first invited to begin conducting meditations for peace for delegates and staff officials. He has also been the inspiration behind a number of colloquia and conferences at the UN which have brought together diplomats, high UN officials and world religious leaders for discussions on world peace. Ambassador Zenon Rossides from Cyprus has said of him: “His work is far more important than all the conferences of the UN. It’s far more important than all the declarations of the UN.”

New York Daily News reporter Tom McMorrow described one of his UN meditation sessions thus: “He ascends the pulpit and chants three times ... After the chant there’s silence: the yogi, in a trance, looks out over the people and, as he gazes into one pair of eyes after the other, there would seem to be a sound in the air, though there is not. Certainly something is there.”

During the 45 minutes or so the meetings last, there is seldom a rustle, or even a cough heard in the audience, and the diplomats and the UN officials seem immersed in the silence. The only movement comes from Sri Chinmoy’s eyes, as occasionally the pupils roll back and disappear behind his upper eyelids, so that all that is visible are two slits of white. At times his mouth may drop open and a tiny air-bubble will form between his lips, for a minute or two, he stops breathing. Then he comes out of his samadhi trance, pranams and the meditation ends.

Such meditations one might expect to find in some secluded spiritual enclave, high in the Himalayas, and not amid the hustle and bustle of modern American life. Those who have “discovered” Sri Chinmoy in America’s urban capital have been, as might be expected, singularly impressed.

Dr A. Alagappan, Secretary of the Hindu Temple Society of North America, commented: “When a person becomes perfect, he wants to shed the benign radiance on others. While India has many holy people who have been able to do this, we in New York are blessed with one person who has been silently and steadfastly doing this. This is Sri Chinmoy.”

L. L. Mehrotra, formerly India’s Consul General based in San Francisco (and Sri Chinmoy’s one-time boss when the latter worked in the Indian Consulate during his early years in America), said of him: “Sri Chinmoy belongs to that stream of thought and sentiment which has shown us The Light for ages ... I know that, even after I and you and everyone is gone, his voice and his message will be with us, for that is the Message Supreme to which I bow.”

Sri Chinmoy’s reputation has spread into the academic community as well. The Master has lectured at over 150 universities in the US, as well as many in Europe and Australia. During a visit to California he was named an honorary visiting scholar at the Pacific School of Religion, a part of the Graduate Theological Seminary in Berkeley, California. And when he presented a complete collection of his works to the Harvard Library, Dean Krister Stendahl of the Harvard Divinity School lauded his writings as a “significant piece in that wonderful puzzle of the totality of human religion.”

From the academic world to the sports world might seem like a long jump, but not for Sri Chinmoy, who excelled in this particular event and was decathlon champion during his teenage years in the Sri Aurobindo Ashram near Pondicherry. Sri Chinmoy sees sports, particularly long-distance running, as a perfect spiritual metaphor. The runner sprinting to the finish-line evokes the image of the spiritual seeker running towards the Supreme Goal; and the athlete’s one-pointed effort to surpass his previous achievements. Sri Chinmoy feels it represents the aspirant’s eternal striving for even greater spiritual perfection. “The real winner,” he says, “is not the one who wins the race, but he who loves to run sleeplessly and breathlessly with God, the Supreme Runner.” The guru has discussed his sports philosophy with such figures as boxing star Muhammad Ali, Olympic triple gold medallist Emil Zatopek and champion marathoner Don Ritchie.

As might be expected, Sri Chinmoy has encouraged many of his disciples to participate in sports. His Sri Chinmoy Centre has sponsored a number of public races in the US, Canada, Britain and Australia — including two full marathons. The spiritual teacher has also inspired his students to carry out noteworthy athletic events along spiritual themes — such as the famous 9,000-mile “Liberty Torch” relay run across the length and breadth of America to celebrate the country’s 1976 Bicentennial. The runners carried aloft a flaming torch, which was passed from runner to runner to symbolise the rekindling of spiritual values in the US. As a result all of these activities the popular Runner’s World magazine awarded Sri Chinmoy a citation in 1978 for “dedicated service to humanity through the promotion of running.”

Practising what he preaches, Sri Chinmoy is an active sportsman himself, averaging about 70 miles a week of running. In the morning, one can usually find him playing tennis at a local high school, where some hundred of his disciples gather each day before work for sports practice, meditation, and prasad.

It was during his ashram days that Sri Chinmoy developed the habit of sleeping only an hour or two a night, drawing the energy and rejuvenative power he needed from meditation. He entered the Sri Aurobindo Ashram at the age of 12, remaining there for 20 years. During this period he had many deep inner experiences and developed the capacity to enter into Samadhi and communicate with God at will. He remained in Pondicherry until 1964, when an inner command directed him to come to the West.

Since then, some 60 Sri Chinmoy Centres have been established across the US, Canada, Puerto Rico, Europe, Australia and Japan. Even so, the Master’s following remains relatively small, since he accepts only those prepared sincerely and wholeheartedly to embrace the spiritual life. For his disciples that means regular morning and evening meditation, a vegetarian diet and abstinence from all drugs alcohol and cigarettes. Chastity is required, except in cases where the disciple is married.

“I’m not interested in collecting thousands of disciples,” he explains, “I’m interested in quality not quantity. When I accept a person as a disciple I take full responsibility for his spiritual life and I make an inner promise that I will take his soul to God. I want only sincere dedicated seekers.”

“There are other gurus and other paths to God,” he continues. “My path is the path of love, devotion and surrender to the Almighty Supreme. First we have to love God. Then we have to devote ourselves to Him alone. Finally comes surrender. This is the last stage. We place our life at God’s Feet and we say: ‘No matter what you want to do with my life, I am ready.’ When we surrender our very existence to God, we become everything that God has and everything that God is.”

To the Western world, with its emphasis on individual freedom, such a philosophy of spiritual surrender is difficult to accept. Whether the West is ready yet for the traditional-style discipline that illumined Indian seekers through the centuries remains to be seen.

But Sri Chinmoy transforms this discipline into a philosophy and lifestyle that Westerners respect and, if any of our modern spiritual teachers will bring America to the highest Vedic realisations, there is a good chance that it will be India’s own Sri Chinmoy.

Published in THE ILLUSTRATED WEEKLY OF INDIA, FEBRUARY 14, 1982