to Sudhahota Carl Lewis by Sri Chinmoy
at the University of Texas in Austin, Texas

During the Peace Concert, Sri Chinmoy requests Sudhahota Carl Lewis to be on the stage. Before singing a song in honour of Sudhahota, he offers the following remarks:

I am extremely happy and I am extremely proud to have here with us Carl Lewis, the champion of champions, the champion supreme in the world of athletics. He has won nine gold medals — nine! — in his outer life, in the field of athletics. Prayerfully, soulfully, gratefully and, at the same time, proudly, I wish to offer him nine million gold medals from my aspiration-heart and dedication-life for what he has done, not only for the improvement and betterment of athletics but also for his tearful heart for children and for all the suffering humanity.

In the inner world, I am not comparing him with gold medals. I am comparing him only with his own heart that he has given and is giving for the improvement of mankind. Many, many, many more summers he will see and I am sure Carl Lewis will do many, many good things to change the face and fate of humanity.

Published in The Inner Meaning of Sport 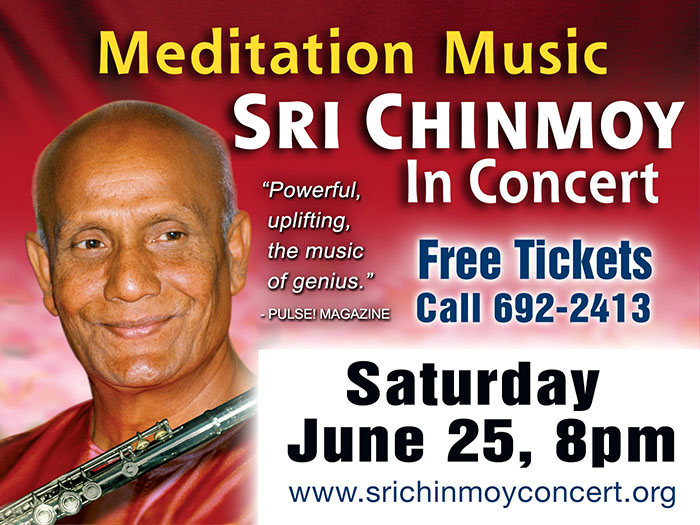 Sri Chinmoy offers a Peace Concert at the Riviera Theater in North Tonawanda, Buffalo, upper New York State. The highlight of the concert is Sri Chinmoy’s performance on a 1926 Wurlitzer band organ.

On the Bus to Buffalo

Sri Chinmoy expresses his gratitude
to the disciples who had enthusiastically sung many of his songs during the bus trip to Buffalo, New York

Published in The Temple and the Shrine